“On average 148 new laws are passed every year in Germany, by the government, and by the upper and lower houses of the parliament”, says Helena Waldmann: “Laws to restrain us, to keep us on a tight rein and to ensure we pull our socks up. In short, we love the whip.” Every stroke of the whip is a new must, a new law, a new command, and anyone who does not respond appropriately is corrected – with a new stroke of the whip, as in horse training. In We Love Horses Helena Waldmann confronts the freedom of movement with the domestication (not only) of horses. For all our pride, we are prepared to let ourselves be domesticated, to engage in an ongoing process of mutual education, monitoring and training without realizing how unfree this makes us, how many constraints we subject ourselves to, unwritten and written laws that dictate what we must do and not do – in order not to stand out, in order to please. “We love the whip and we offer our backsides freely.” Helena Waldmann’s exploration of this carrot-and-stick mechanism in We Love Horses results in a work that is a plea for more human freedom and rambunctiousness.

Successful circus trick and orgasm fall into one.

Acknowledging the human propensity to be tamed and domesticated We Love Horses makes a fervent plea for more bad behavior.

We Love Horses raises the awkward questions we expect from a work by Helena Waldmann. Acknowledging the human propensity to be tamed and domesticated she makes a fervent plea for more bad behaviour. The ‘taming’ is conducted by magnificent dominatrix, Anneleen Dedroog, aided by a fearsome whip which she cracks with relish. Her height is increased by wildly exaggerated platform boots giving an almost equine look to her legs and, of course, the regulatory corseted body. But in the manner of the brazen sexuality of ancient Greek satiric drama there is enjoyment in the ‘pleasure, with pain for leaven’ to quote Victorian poet Algernon Charles Swinburne, an aficionado of such sports, as a row of plumped up pink buttocks jiggle in anticipation.

Conformity in modern society more often reveals a grey, inhibited and chilling aspect but delivered as a rambunctious antisocial romp it made an intriguing theatre spectacle. This was rebellious conformity to the cracking of the whip, a delight in subjugation acknowledged in the tremulous plumes emanating from the bald caps in Judith Adam’s inventive costumes.

GRANDES DAMES is a mixed bill by Goecke, Brunelle, Waldmann, Gauthier and Foniadakis. The inventive program presented by Gauthier Dance, offered an evening of celebrations. The two premieres by women, and two created by men in homage to female icons of dance, were electric in their passionate energy. Politically charged, sometimes frightening, these dances say things about the frustrating society we live in, suggesting the ways controls impact on our lives.

We Love Horses proved to be a disturbing work by Helena Waldmann whose political dances are developed and toured globally. In We Love Horses, a powerful woman (Anneleen Dedrog) wearing stilt-like boots and clad in transparent black, cracked a whip over the bottoms of terrified horses, played by five dancers wearing false rumps. Made to dance, to stretch, to reach on teetering hoofs, they were degrades as they danced for their vicious dominatrix.
Waldmann suggests in her program note that she’s commenting on the way freedom is eroded by governments imposing controls on citizens. Perhaps so, but you can also make a more literal observation. I will never watch performing animals again without thinking of Waldmann’s terrifying look at the kind of cruelty that forces them to dance.

All power to Gauthier Dance for presenting this mixed bill that recognizes such inspiring titans of dance as Bausch and Lecavalier. Add Waldmann, a strong political voice, and Brunelle, who is making waves in Quebec, and you have quite the program. Grandes Dames, indeed. 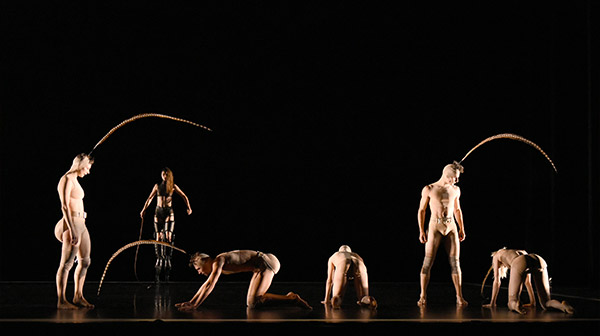