After my research trip to Uzbekistan on Khorazm Dance Lazgi, I am going to research alternatives now along the debate on cultural appropriation. I distinguish between the Western tendency to collect and preserve artifacts, and the ability to simply observe phenomena. Dance as an ephemeral form seems particularly suited to questioning this cultural difference.

Behind the Caspian Sea, the steppe begins. Kazakh, soon to be Uzbek ethnic groups live here. In one province, Khorezem, not far from Lake Aral, which has almost dried out, a particularly strange dance is found on the streets, in restaurants, at weddings. It is called Lazgi – a continuous sequence of fluttering fingers, bent joints and shivering limbs. It looks as if the dancers are trembling and blazing like fire. In the ancient Khoresmian language, the word Lazgi means: the end of something and the beginning of something new.

Lazgi is probably the oldest dance in the world still practiced today. Originating in the tradition of the Zorasts (Zarathustrians), who worship fire and the sun, it is around 3000 years old according to some clay drawings found in the Kaplankyr Mountains – and since 2019 protected by UNESCO as Intangible Heritage of World Culture.

The research in Tashkent, Khiva, Urgench and Buchara is supported by Goethe Institut and
FONDS DARSTELLENDE KÜNSTE_NEUSTART KULTUR#TakeCareResidenzen

It was a reboot of live culture during a short summer break of the pandemic focusing on pure joy and an untamed concept: Balagan. Literally translated as „mess“, Balagan stands for the original folk theatre: a turbulent, cheerful fairground spectacle, wandering from town to town like once Commedia dell’arte did. And what goes with it on three wheels? A Piaggio Ape, the popular three-wheeled cargo van.

BALAGAN! is a production by Helena Waldmann and ecotopia dance productions
ROXY Ulm and TanzLabor Ulm
supported by the city of Ulm
funded by the programme Kultursommer 2021 by the Beauftrage der Bundesregierung für Kultur und Medien with funds from NEUSTART KULTUR 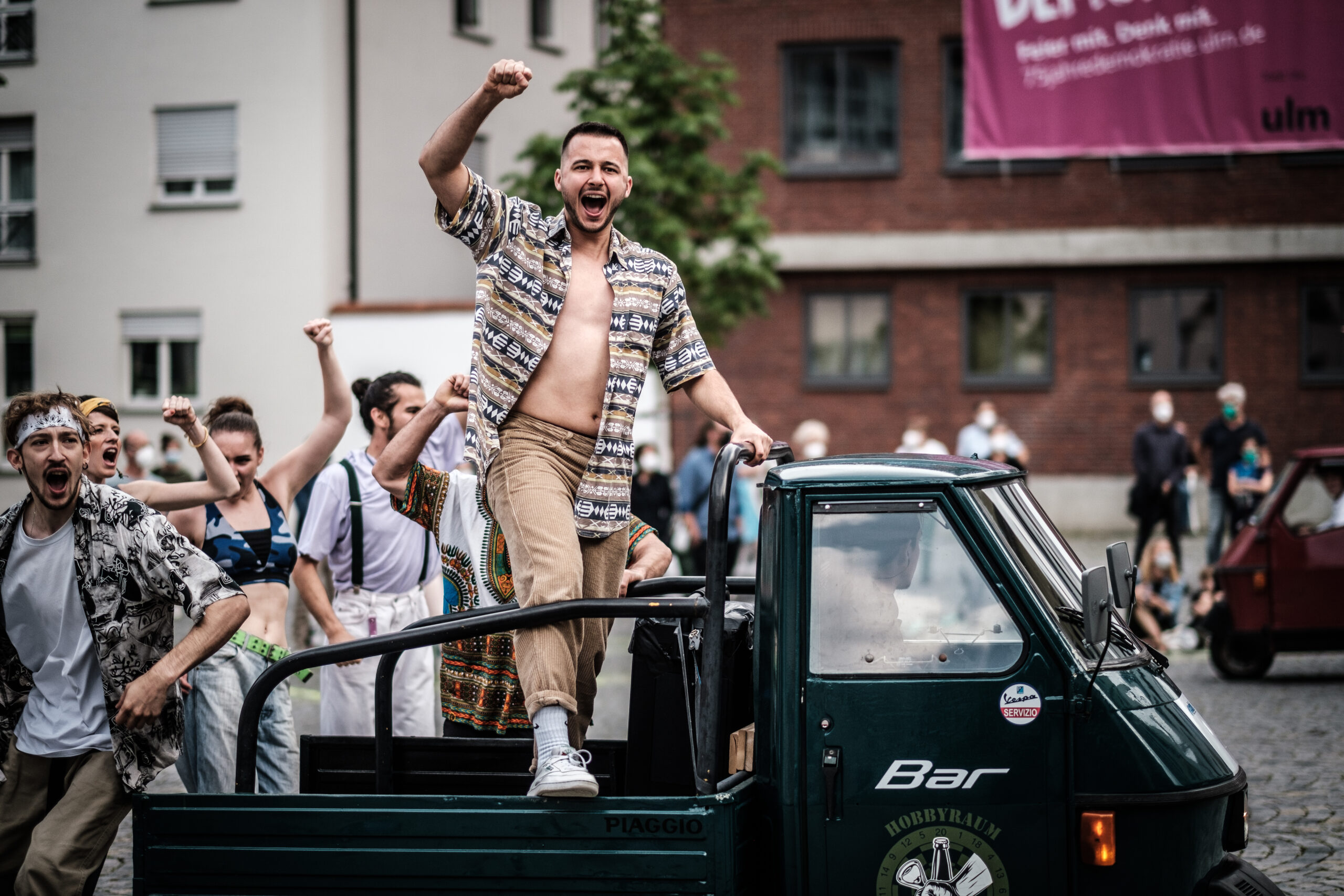 All artists are „Made in Bangladesh“

Millions and millions of kilometers of yarn are unwound unremittingly from bobbins worldwide – in the myriad textile and sewing factories on this earth. Mechanically speaking, bobbins perform an almost endless pirouette. The human body follows exactly the same principle. Helena Waldmann’s performance „Made in Bangladesh“ has focussed especially on the resulting economical disaster.

Three-wheeled motorized cargo bikes that radiate a lot of sympathy, signal joie de vivre and that people look around for with a smile – Piaggio Ape brand – are vehicle, stage and throne at the same time for a pop-up feast with the participation of regional cultural actors and the population. This community, quasi ad hoc assembled, appears and acts united in public space and asks for participation in social life and a politics of appearance.
Their stage is the loading platforms of the Piaggios Ape, which ‚dance‘ their rounds and formations in the market square. Ever new people on the loading platforms steer the Ape drivers as if with a rein and celebrate the dance of our attitude on their throne and in the middle of the community in a corona-like manner.

BALAGAN! is a production by Helena Waldmann and ecotopia dance productions
in co-production with Kulturamt Aschaffenburg
supported by the NATIONAL PERFORMANCE NETWORK – STEPPING OUT

WAS BEAUTIFUL. CAN GO NOW...

Age(ing) in the Performing Arts

Excerpts from interviews on ‚Art and Age(ing)‘, conducted by Angie Hiesel + Roland Kaiser 2020/21.

theme table:
Helena Waldmann
FROM OLD TO NEW
How to become unfaithful to oneself?
Art is repeated until it is yesterday’s news. And then? It has to reinvent itself, upcycle itself. A tightrope walk: How can I remain innovative? And how far can I move away from my old image? 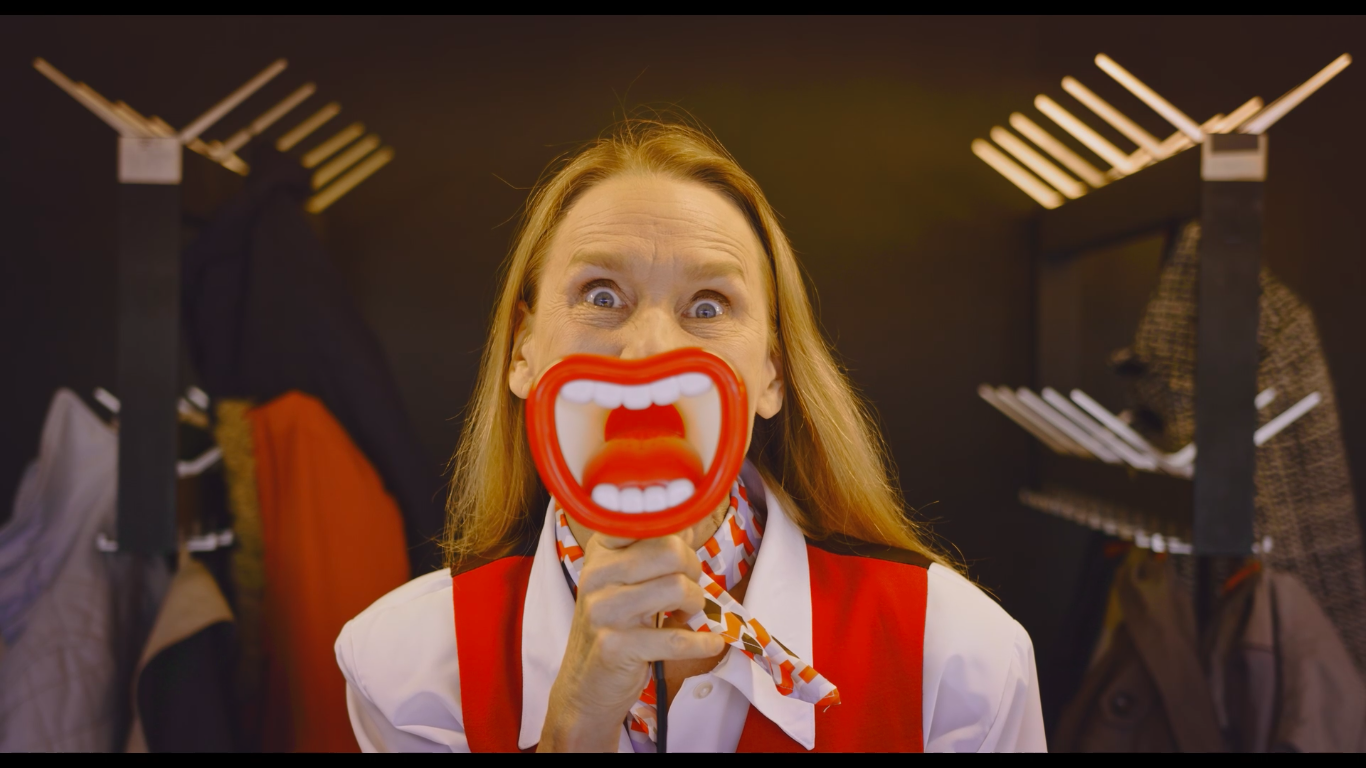 My approach is that the arts have the same globalized tools as other industries. In the arts, the „white cube“ is an internationally well established format that can be found or set up anywhere in the world. On each of the four white walls, the work of an artist is shown and brought into connection with each other on a shared display to the audience. Four performances that take place simultaneously all over the world. Four positions, the result of rehearsal and political processes, to be experienced simultaneously in four countries and hybrid on the net. To make this possible, research, conversations, common ideas and exchange are the means of art to stop looking at the world as one closed border.

"Encounters" had to be CANCELLED due to Corona

These were our plans when we started working on „Encounters“ in autumn 2019:
My dear colleagues Sidi Larbi Cherkaoui, Richard Siegal, Gintersdorfer/Klaßen, Rainer Behr and myself are starting a new choreographic adventure in collaboration with Tanztheater Wuppertal. We all are ready now to create a great blend of everything, our styles from different traditions together with dancers both from Tanztheater Wuppertal and abroad, to celebrate our inquisitive and critical view to the world, mixing perspectives and creating a wild evening.

Reaching for the stars

Starting from the physical descriptions of mechanics in Isaac Newton’s „Principia“ to the observations of Paul Virilo for a „dromology“ of our locomotion, I was able to complete nine months of intensive research on current concepts of mobility and their relationship to choreography. The study of acceleration as „progress“ and the „heightened locomotion“ necessary for it – the vehicle has always been a stage as well since its construction as a carriage – gave me courage to investigate the choreographic quality of vehicles as possible dancers.

A cultural-virological conversation on the occasion of the Corona crisis

Dialogue in Englisch: Overprotection is no protection

It is a strong, magnificent piece about the fear of the other and a plea to deal more serenely with alleged danger. Helena Waldmann’s most recent work, „The Intruder“, features a rapid succession of erotic, comical and combative “meetings”. Three dancers skillfully attack each other, defend and protect themselves with evermore focus mitts and kick pads until they finally become almost unable to move and hence vulnerable. They are clowns with poetic depth, whose slapstick leads to subtle closeness to the foreign in a fantastically-comical tango scene. The piece impresses through the dancers‘ willingness to take risks, who do not just perform the sudden outbreaks of violence. All the more light-footed, dance director Helena Waldmann forges the bridge from political to medicine, from nation to body, and from martial arts to ballet and live singing.

This new production takes a look under the skin, inside the body, and at the same time inside the system of the „state“. What penetrates from the outside is considered a „foreign body“. Isolating, even outright combatting it seems to be the obvious solution. But in reality neither a body nor a territory can completely isolate itself from the outside world. What’s more, medicine knows that only an organism that is prepared to change can survive … Waldmann translates this insight into images that are as haunting as they are surprising. For example, her actors pad themselves with focus mitts to visualize protection driven to extremes – with a literally „staggering“ and also very comical effect.

At POWERHOUSE at Festival Bolzano Danca

The Trailer of The Intruder – an Autopsy – is out now!

Helena Waldmann as guest in german TV show DER TAG.
She talks about the upcoming piece The Intruder and challenges and inspiration in her (work)life. 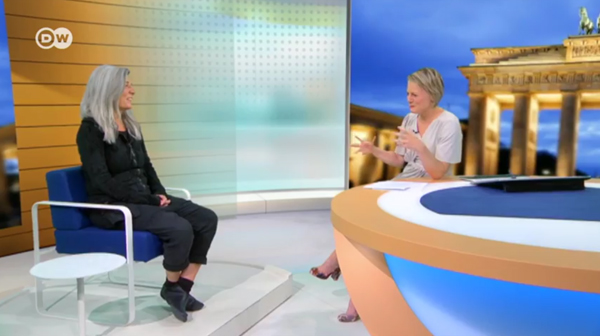 Helena Waldmann invites you to an autopsy. The view goes under the skin, into the interior of the human body and at the same time into the interior of the system „state“. No body, be it that of a living being or human society itself, functions as a closed system. Openings are essential for life, but they also make us vulnerable. The first impulse is to protect oneself: Barriers are erected, potential attackers are to be kept away. But the fact that the intruder can also bring benefits is an old insight in immunology that is gaining new significance in current research. The „biological self“, the self-sufficient body that functions only by itself, is now regarded as an illusion. Humans live with and through a multitude of independent microbes and bacteria. Attackers challenge the immune system and cause it to learn and develop. Medicine knows that only the organism that is prepared to confront the foreign will survive.

On the microscopic level of the body, Helena Waldmann stages the macroscopy of a politics. Using the means of dance, she shows strategies of defense and adaptation using the very special abilities of her performers. After using ballet in „get a reovlver“ , Kathak dance in „Made in Bangladesh“ and acrobatics in „Good Passports Bad Passports“ she is inspired this time by the Chinese martial art Kung Fu. Here attack and defense are one. The strength of the respective opponent is neutralized by agile step and stroke techniques and turned against the attacker. The goal is to grow on the opponent without destroying him. Helena Waldmann thus proves that openness, freedom and freedom of movement are vital in order to pre-empt the perfidious construction of security which, in its logic of unity, can only produce the dead alive.

The internationally renowned dance director was honoured for her political theatre work with the Bertolt Brecht Guest Professorship, which she holds in the winter semester 2018/19 in Leipzig. In Ludwigshafen she has already performed „Letters from Tentland“, „get a revolver“, „Made in Bangladesh“ and „Good Passports Bad Passports“.

„The Intruder – an autopsy -“ touches a discourse that BASF has stimulated through its Tor 4 support program in the Rhine-Neckar metropolitan region. 16 projects from the fields of music, dance, literature and the visual arts will deal with the same topic. Why is everything getting better? This question can also be posed in view of the constant perfection of security systems, which lead to isolation and rigidity on both a medical and social level. BASF particularly promotes our dialogue with the public. In a matinée one week before the premiere, besides the choreographer herself, people from various fields will be guests and after the premiere on June 8 we invite you to a follow-up discussion.

The Incorporation of The Other by Antje Landmann

Creation for Freespace: Dramaturgy and Beyond

Video of Workshop and public seminar on dance dramaturgy