In Bert Brecht’s short piece on gambling, the eponymous hero Johnny plays poker on an ocean liner, winning a fortune but losing his life.
Arranged like a poker game with 52 cards, „luckyjohnny“ is based on the concept of the bluff. The cards are being constantly reshuffled on the two-dimensional, multi-layered screen – with video projections, light and bodies, voices and music.
Luck hangs on the two legs of the dancer Frieder Bachmann and Pina Bausch protagonist Mechthild Großmann, lends her voice while eyes wander on the rocking deck.
Here, film and dance are almost indistinguishable as befits the story’s ambiguity.

Everything is split into two halves, like playing cards. Everything is as smooth as a deceptively shimmering surface. The upper half of the stage area is covered by a smooth screen, while the lower half resembles a picture puzzle made up of areas of depth and flatness. The three-dimensional stage area is transformed into a two-dimensional projection screen onto which images are projected from the front and rear.

Helena Waldmann is an unparalleled mistress of the art of illusion.

A real stroke of luck: the multimedia 'luckyjohnny'.

The spectators sit in the auditorium like Plato in his cave, their backs to the world, the essence of which is inaccessible, watching illusions and depictions of reality which they take to be the world. Every message that ‚luckyjohnny‘ conveys says something about the theatre and its images.

in collaboration with Institut for theater-, film and media studies of the University Frankfurt/M. (D) 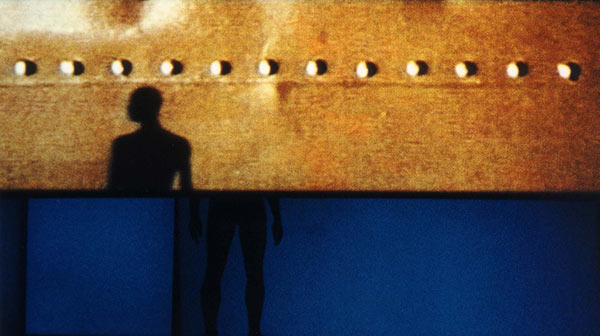 assistant to the director

Everything about this evening is split into two halves, like playing cards. Everything about this evening is as smooth as a deceptively shimmering surface. The upper half of the stage area is covered by a smooth screen, while the lower half resembles a picture puzzle made up of areas of depth and flatness, thanks to a clever perspective effect generated by the use of slides. Helena Waldmann transforms the three-dimensional stage area into a two-dimensional projection screen onto which images are projected from the front and rear.
Brilliant blue, gaudy red, soft green and radiant yellow, accompanied by Latin American rhythms and kicking silhouettes of dancers‘ legs, tell of the wild festivities of the lucky winners in Havana. Later, when the monotony of the voyage makes all differences null and void and Mechthild Grossmann‘s husky voice incessantly repeats „the sky, the sea“, a wave sweeps high, then recedes, returning the screen on the stage to a white emptiness.

With Helena Waldmann, the spectators sit in the auditorium like Plato in his cave, their backs to the world, the essence of which is inaccessible, watching illusions and depictions of reality which they take to be the world. Every message that ‚luckyjohnny‘ conveys says something about the theatre and its images.

The producer tells stories using contemporary means, of which language is only one, albeit an indispensable one. Together with her literary manager Susanne Winnacker, video artist Anna Saup, musician Tricky Cris and lighting wizard Herbert Cybulska, she has developed a new kind of visual narrative technique which is all her own. None of the technical effort is superfluous, everything is justified by the simple narration of this tale about the loss of reality through an almost insane addiction to gambling. The players form the element of chance in their perfectly conceived image spaces.

The presence of the body, endlessly distant >

As in a rococo costume, Helena Waldmann drowns her actors in the apparatus of visual desire: behind a kaleidoscopic mirror, projected images and lighting effects of astounding sophistication in „vodka konkav“, in and behind a wide video screen with many images in „luckyjohnny“. The literary text, which provides the continual impetus, shapes the basic pattern of the illusory space, but all that remains of language at the end is sound. The only directly perceivable thing for the observer is the projected image, the illusion of the artiste’s body which, much reproduced and distorted, is shattered upon the flatness which blocks the profundity of the stage area. What is illusion and what is reality remains – unlike in fairground halls of mirrors, unlike in films too – indistinguishable. It’s an interplay of media, all about desire and „putting it off“ and the predominance of the visual apparatus, which provokes acquiescence and opposition at the same time. Because in their hypnotic perfection and Wilsonistic beauty, these illusory worlds show up clearly and somewhat scornfully what they conceal: the presence of the body, endlessly distant.

In the beginning, there has been a text, which was easy to understand but nevertheless astounding. Helena Waldmann’s „Gesamtkunstwerk“ changes everything to music – music for the ears and eyes. Words are gaining rhythm and melody which then generate con- and dissonances utilizing video animation, light-effects and shadow-dance. The musical and the spatial order goes hand in hand and is at the same time knitted into the narrative. Brecht in his fable dialectically plays with the limited space, the boat on which the plot is unfolded – and all of the endlessness far beyond – the sky, the seas, the depth of the human soul. In ‚luckyjohnny‘ the stage is largely reduced to a two dimensional slit and connected to the perception of the ear in such way that only through this the essential imaginative structure of the process is perceptable for an audience. The poetic quality and the aesthetics of Brechts text „Four men and a Pokergame – or too much luck is no luck“ is to be found only in its composition, through the aimed at and generated „moods“ and Helena Waldmann triumphantly succeeded in creating a stage for that.

Envy hosts the last round of Poker >

Waldmann has staged this story of a gambler – who wins a fortune on an ocean liner voyage from Cuba to New York and at the end dies at the hands of his fellow-gamblers – in her own very special way. She thrills, and creates emotional tensions, shamelessly alienates and vigorously stimulates the imagination of her audience. An interesting interpretation of the Brecht tragedy that begins with cigar smoke, cold drinks and laughter and ends in murder: the warm and increasingly penetrating lighting effects and the music that progressively rises to a din draw the spectator into the very centre of the action. Frieder Bachmann does some fascinating dancing – visible only as a silhouette. Producer Waldmann goes for fragmentation. Our desire to see the whole of the tragic Johnny – at first an attractive winner and at the end a victim of envy – remains unassuaged. Johnny remains inaccessible. The deep, dark voice (that of Mechthild Grossmann, who was for many years a member of the Pina Bausch company) echoes through the auditorium and captures our attention. It determines by association the direction of the voyage in the spectator’s mind: whether into the tropical doldrums, onto the high seas, or into avarice, that profound hatred that arises from pure envy. There seems to be no escape. If only it weren’t for that ever-recurring sensation of cool detachment. As if the scenery of projected images were mirrored in the Frankfurt skyline. A thrilling show. 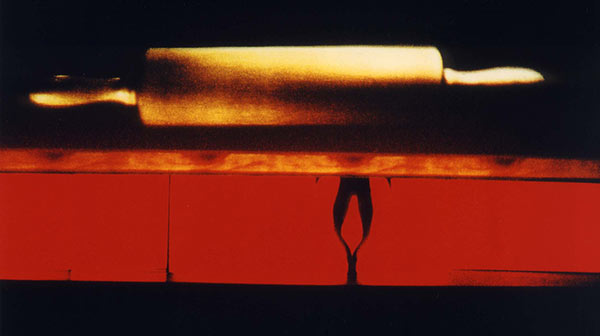